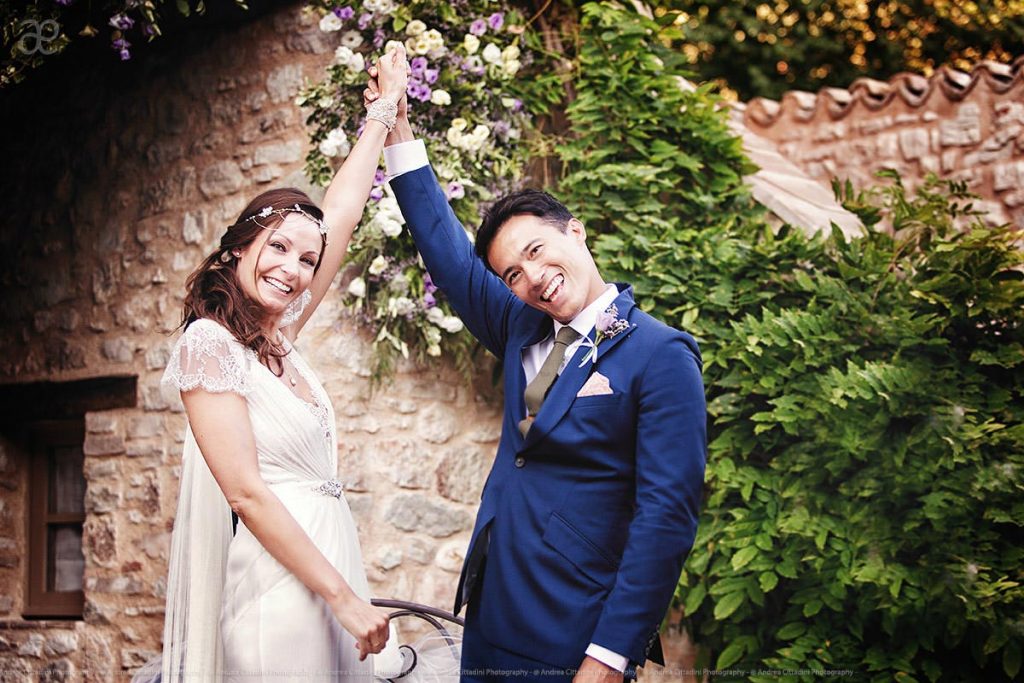 George and Jessica’s ethereal Wedding Blessing Ceremony was held near Spoleto at the delightful ‘Borgo Marmotta’ in the magical region of Umbria, famous for its ancient history and woodland.

They met as University students in Bristol and George knew he would marry Jessica even before their first date because she possessed an uncanny ability to transform the ordinary into the extraordinary…. which is exactly what happened at this rarefied destination wedding in Italy…

Whimsical children’s literature provided the desired element of fantasy. Nestling close on a cosy love seat, the Bride and Groom were entertained by excerpts from The Velveteen Rabbit by Margery Williams and a touching meditation upon eternal love composed by Phillip Pulman in ‘The Amber Spyglass’:

‘I will love you forever; whatever happens…. We’ll live in birds and flowers and dragonflies and pine trees and in clouds and in those little specks of light you see floating in sunbeams… ‘

In natural theme Pre-Raphaelite beauty Jessica appeared in a supernal dress by Jenny Packham with appealing title ‘Aspen.’ Her veil, head band and cuff were from Gillian Million. George cut a Princely figure in a blue suit from Reiss tailored to perfection.

After the ceremony festivities continued in an ineffable fashion and as in Edward Lear’s legendary ‘The Owl And The Pussycat’, which they also chose as a reading:

‘They dined on mince, and slices of quince,
Which they ate with a runcible spoon;
And hand in hand, on the edge of the sand,
They danced by the light of the moon.’

I can well believe they did. In otherworldly Umbria anything is possible with a little imagination and a touch of magic…